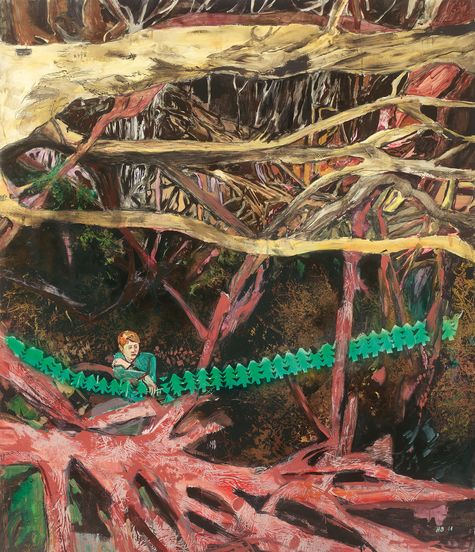 The Forest Through the Forests

Born in Miami, USA in 1978, Hernan Bas’ exceptional talent in painting enabled him to graduate from art school at the age of 18 and devote his time to becoming an artist. Bas has been invited for exhibitions by international commercial galleries, including Fredric Snitzer Gallery, Galerie Perrotin, Galerie Thaddaeus Ropac, and Saatchi Gallery. As a high-profile young American artist, Bas’ works are prized by New York’s most emblematic art institutions, such as MoMA, Whitney Museum of American Art, and the Brooklyn Museum, and sought after by private collectors around the globe, especially in the Asia region.

Bas’ art has a strong narrative quality that shows influence of literary classics, historical themes and the film and television media of the modern era. The young masters in Bas' paintings not only look physically alike, but their androgynous appearances also come with a sense of loneliness and pride, ignoring the scrutiny of those around them. Bas painted The Forest Through the Forests in 2010, which was exhibited in 2011 at his solo exhibition The Forest for the Trees curated by the Fredric Snitzer Gallery in Miami - the first commercial gallery to organize a solo exhibition for Bas. The artist once described the natural environment where he grew up: Surrounded by forests, his young mind was branded with the mysterious atmosphere of the woodlands, which became his artistic inspiration later on. Such a distinctive style is displayed comprehensively in The Forest Through the Forests, where the smallness of the people and objects, in contrast with the magnanimity of the space, expands and strengthens the sense of alienation and loneliness. The green figures and Christmas tree ribbons shine through the dark-colored background, a technique frequently used by artists in surreal scenes to increase delight by adding highlights.