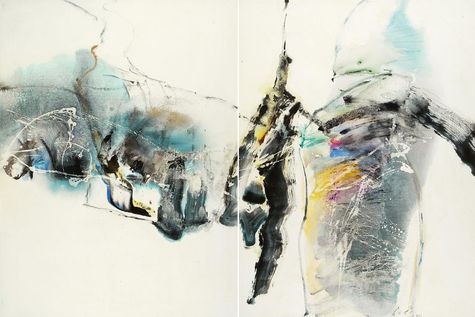 This lot is accompanied with a certificate of authenticity signed by Janay Wong from David Findlay JR Gallery, New York.

"In 1966, Chuang Che received a grant from the John D. Rockefeller III Foundation to study contemporary art in the United States, and moved to the United States after the 1970s. Influenced by the prevailing Abstract Expressionism (representatives: Jackson Pollock, Willem de Kooning, etc.), Chuang Che began to use diluted oil paint, acrylic and ink to create, express his pursuit of the essence of Chinese landscape painting through the free movement of brushes. Therefore, compared with the abstract works of the 1960s, the works of this period have already shown the establishment of Chuang Che's basic painting style. In this lot, ""Untitled A7272 (Diptych)"" in 1988, we can see after deconstruction of form, the natural and dynamic vitality of landscape.