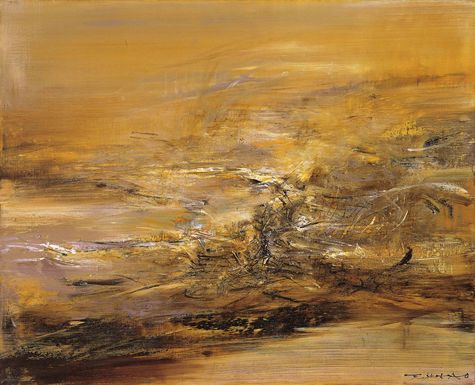 Signed lower right Wou-ki in Chinese and ZAO in French
Signed on the reversse ZAO WOU-KI in French and dated 21.3.64

Zao Wou-ki's accomplishments within and outside the realms of painting are indisputable: Just recently, he was honored with the highest accolade given to an artist by the French government, by being elected to the Acad?ie des arts et lettres in Paris. Whenever someone discusses Chinese or Western art history, it is hard not to come across Zao's name. As a forerunner in Abstract Expressionism, his achievement in the art arena has garnered quite a following in later Chinese artists. Just as how art critic Philippe Dagen, from the French publication Le Monde, described Zao and his paintings - as a vagabond - the journey of this Chinese artist in the Western art scene has been an adventure.

In the spring of 1948, with a heartful of admiration for Paul C'ezanne and Post-Impressionism, Zao left Shanghai on an ocean liner. He traced along the path of Western art form towards its origin, in a bid to learn and understand European art. During the time when he was in Paris, marveling at the works of the great masters in the Louvre, Zao stayed at the Montparnasse - a favourite haunt of many literary and arts personnel. There, he became sculptor Giacometti's neighbor.

Zao tried to establish himself in Paris - concurrently learning French and painting at La Grande Chaumiere. In this artistic Mecca where artists from all over the world convened, Zao had the pleasure of being acquainted with some famous names, including Hans Hartung, Nicolas de Stael?, Pierre Soulages, Vieira da Silva, and Jean-Paule Riopelle. With the help of writer Henri Michaux, Zao managed to progress into the heart of the Parisian art circle.

Zao once said: "Picasso taught us how to draw a Picasso, Chaumiere taught me how to appreciate the essence of our Chinese paintings." In other words, when Zao looks at Picasso's paintings, he does not get inspired or enlightened. But looking at Chaumiere, in particular "Mont Sainte Victoire" Zao claims: "The undifferentiated hues between the mountains and the sky are strikingly similar to that in classical Chinese ink paintings." He also believed that traveling is one of the best ways to recharge: While ancient Chinese literati seek to fathom philosophies from the mountains and valleys, modern artists naturally too, can turn to museums, diverse cultures, and various places of interest, for inspiration. Once, Zao discovered Paul Klee's paintings in an exhibition in Bern, Switzerland. Paul's works, very much influenced by Chinese art, struck a chord in Zao's heart. It brought Zao to a whole new level in Western art - a level of poetic significance. For instance, he used symbols and wavering lines to depict feelings of joy. He also got his inspiration from ancient Chinese hieroglyphics and characters, as he immersed himself in the lower rungs of self-fashioning. Subsequently, he abandoned the symbols and images altogether, leaving only an expansive space, not unlike that of magnificent mountains and the endless universe.

His copious creative energy brought Zao to yet another peak in the 1960s. By then, his Abstract paintings were already very well received in Europe and America. In an interview, Zao mentioned: "Everybody is tied up by one tradition, I am by two." Clearly, both traditional Chinese cultures and Western art have a concomitant effect on him. More than once, he talked about the influence Paris had on him - Paris made him a true artist. As his thoughts matured, Zao gradually rediscovered China. This was progressively being reflected in his paintings. Ironically, credit goes to Paris - because if not for his study trip to Europe, and if not for his exposure to the artistic hustles of Paris, Zao's art would not have been in the form that we see today. Without a doubt, his paintings amalgamate the essence of both Chinese and Western art. As Japanese art historian Shuji Takashina puts it, Zao Wou-ki has allied "the French way of feeling to the far eastern awareness of space."

For the period spanning 1960 to 1970, Zao channelled all his energy towards painting. As written in his autobiography, he took on these 10 years like a speeding Porsche. He was racing against time to present his newfound thoughts. Driven by love, he worked fervently. Looking back, he felt a sense of gratification and achievement, having advanced his works into the matured stage.

In Zao's first catalogue raisonne written in French, author Jean Leymarie described the constant development of his art in the 1960s with respect to the use of contrast and harmony to portray rhythm, texture and color modulation: sometimes Zao favours monochrome, and at times rich dark dyes of brown with streaks of black; other times the tone is opalescent and light, like silver grey brume. While other modulations include snow and sapphire, mousse and rubious sumptuous accords.

When French art historian Rene de Solier asked Zao about his tastes in colors, Zao replied, "I love all colors!" de Solier then asked, "Which dominate?" Zao said, "None. I have no preference. I'm just motivated by vibrations." This short dialogue revealed the secret behind the elegance in Zao's paintings: His focus is not on colors, but on the fluid nature of light. His key interest revolves around the inner space.

His paintings exude a poetic calm akin to the vast universe. The painting "21.3.1964" is built around red, brown and black brush traces intertwined against a background of white to accentuate the vibrant colors - giving the yellow and purple an even more exquisite rhythm. As poet Wai-lim Yip so aptly describes: "Looking at Zao's painting is like standing alone at the edge of a stage, listening intensely to the orchestral performance by the luster and light." This illustrates the perfect setting for Du Fu's poem "I bare my breast towards opening clouds" as his barrel chest parts the incoming clouds.