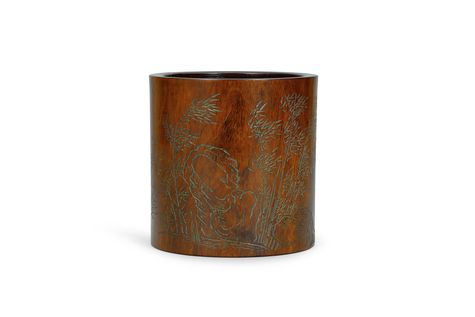 A HUANGHUALI CARVED AND INSCRIBED BRUSHPOT

This huanghuali brushpot is cylindrical with a dense structure, majestic grain and a fine polish. Bamboo and rock were incised and depicted as in a scroll. The bamboo sways with the wind and the movement of the leaves were captured by the sharp incision into the wood surface. A poem was engraved on the brushpot, describing the relaxing life in a luscious green bamboo garden with pots of plants and flowers, after the rain and the heat, as the frogs sing in the pond. Summer of 1744 by Zhi-Yan.” It was the 9th year of the Qianlong Period and Zhou Hao the carpenter was already 62. He had several sobriquets including Jin-Zhan, Zhi-Yan and Zhi-Yan, also known as Zhou Ran derived from his bun on the head. He followed Wang Hui to study paintings and excelled in depicting figures, flowers, birds and landscapes. He was exceptionally good at depicting bamboo, gusts of wind and snow in short quick incision. He was fond of Su Dong-Po's literature and could write compose poems. Given his background, one could notice the incorporation of both paintings and carvings in this piece of work. His achievements were admired by Jin Jian-Zhai and scholars of the age.