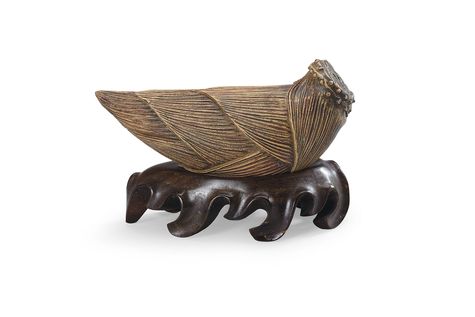 This sculpture was modelled as a chunky bamboo shoot with a balanced and natural depiction. The sculpture was made with light yellow clay, highlighted and sketched with darker ochre clay. The end root was coloured in brownish red. The bamboo shoot is tightly wrapped by its outer skin which were naturally engraved with intense lines. The root is naturally depicted with air holes and thin ends.

Chen Ming-Yuan was born in Yixing of Jiangsu, and was an acclaimed pottery artisan during the Kangxi Period of the Qing Dynasty. Born to a family of pottery makers, he was the grandson of Jiang Shi-Ying and son of Chen Zi-Gui, who were well-known for their refined clay teapots and scholar objects. He was known for natural real-life depiction of common objects such as vegetables, beans, peanuts, corn, walnut and lotus roots. He was creative in making clay art objects and teapots which always bear his seal mark. It was said that his works were sought-after by overseas clients, and could be regarded equally as imperial yixing clay artist Da-Bin. Artistic achievements of Ming-Yuan have already surpassed other artists of the time.